Hundreds of severely malnourished children have received lifesaving treatment thanks to an extensive Islamic Relief project hitting back at malnutrition in Niger.

Niger regularly faces climate challenges like droughts and flooding, which are pushing the many people who rely on subsistence agriculture to the brink. The situation is worsened by conflict along the country’s borders which has uprooted many families.

The country has been gripped by food crises, most recently in 2012 – and last year an estimated 1.7 million people needed food assistance.

Child malnutrition is rife in Mali

Of these, 384,000 children under the age of 5 were thought to have severe acute malnutrition – a condition brought on by food shortages.

Islamic Relief had been delivering a programme to improve community systems supporting women and children in the Tillabery region, which faces exceptionally high rates of infant malnutrition.

Nearly one in ten children in the area are malnourished.

In 2018 we extended the scheme to reach even more vulnerable people in Say and Torodi districts. 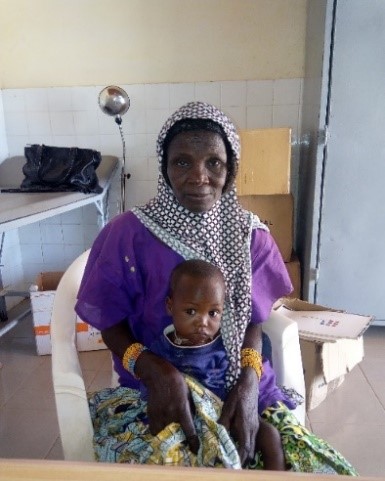 Ali with his grandmother at the Islamic Relief malnutrition treatment centre

At Torodi Health District Hospital, we set up a new intensive nutrition recovery center treating children under the age of 5 with complications caused by severe acute malnutrition. We provided a new ambulance too, to help with patients from remote villages who are referred to the hospital.

We equipped 24 other centers with vital medicines and food for malnourished people, and recruited 16 additional support staff.

Some 365 severely malnourished children were treated free of charge, and 94% made a full recovery.

Ali had severe acute malnutrition when, at 8 months old, he was admitted to a treatment centre last year. His grandmother told us she had given up hope, but “he received good care and thank God, he was saved.”

To empower families to keep hunger at bay, Islamic Relief helped 50 women to grow their own food in gardens irrigated by water from a new solar-powered borehole.

We also took to the airwaves on community radio stations, went door to door and held focus groups to raise awareness of important issues such as gender-based violence and child protection.

By training 67 volunteers and health workers, we made sure such issues and day to day health matters continue to be discussed in communities even after the project ended earlier this year.

More than 6,100 people benefited from the scheme by Islamic Relief, which has been delivering emergency and development projects in the country since 2005.